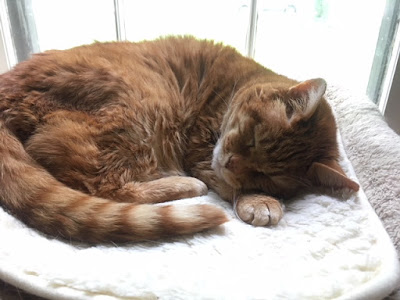 Posted by mankybones at 1:47 PM No comments: 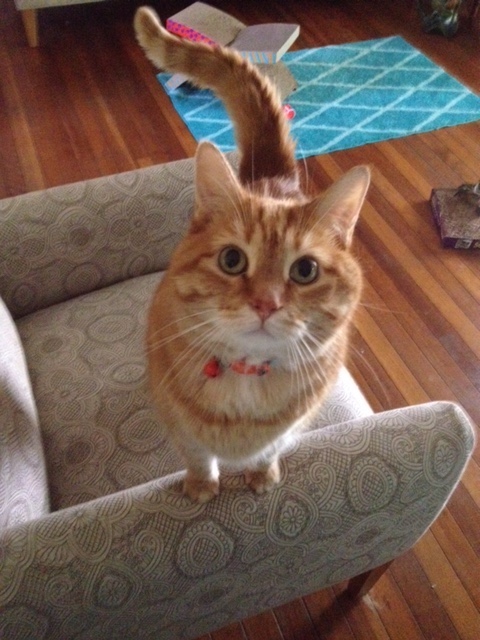 Posted by mankybones at 7:03 AM No comments:

I've been watching a truck load of black and white flicks via YouTube. He Walked by Night is full of yummy camera work by John Alton.  After a beloved officer is shot on the way home from work, the Los Angeles county police department put out a dragnet (yep) to catch the killer. The thing I really like about these old timey cop films is they usually contain a lot of old school procedural police work. Some of the best cop shop scenes are of Jack Webb as a young gee-whiz cop forensic expert. The L.A. sewer system chase scenes near the end are beautifully shot.

No, I'm not a Jerry Lewis fan, but The Delicate Delinquent is worth a watch. Jerry Lewis is Sydney L. Pythias, a janitor who is mistaken for a gang member. A very young Darren McGavin, so young in fact you can see his freckles, plays Mike Damon, the cop who wants to give juvies a second chance like he had. Martha Hyer simmers as Ms. Henshaw who is oh-so-pretty, but oh-so-strict.

The bongo drum Blackboard Jungle opening is cool. Jerry keeps the wacko screwball stuff to a minimum with only brief outbursts of knuckle headedness. Mike Damon wears a pair of Jack LaLanne pants to dinner that seem to have no visible fly.  An honorable mentions goes to Robert Ivers as Monk. He was a like a slightly too thin, poor-man's James Dean. Angela Landsbury is oh-so-hot in A Life at Stake.  You can see the water steaming around her in the pool scene! I must admit I had no idea Angela looked like this in her heyday. Her "hunk" co-star Keith Andes must've gone to the Cigar Store Indian School of Method Acting. No wonder she's drinking in so many scenes. I bet she was thinking - "Get this dead fish in a suit out of here!"  While no one is going to mistake this film for a theatrical masterpiece, it's certainly a time capsule flash back of 1954 L.A.

Posted by mankybones at 9:40 AM No comments: 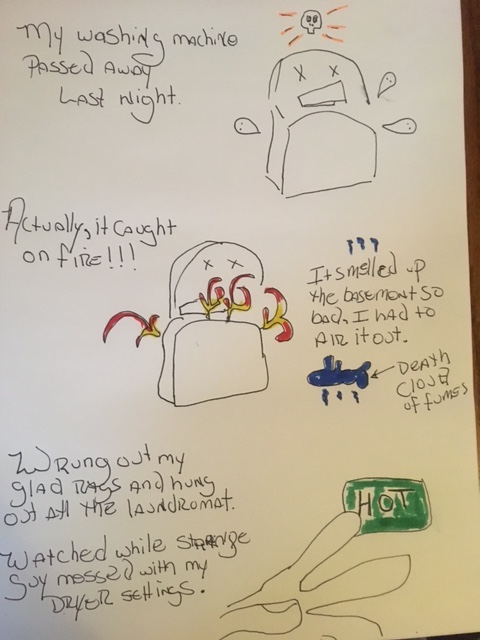 Posted by mankybones at 5:39 PM No comments:

Oddly enough, I woke this morning to the beginning strains of "Life on Mars?", my 4:00 AM iPhone alarm song,I  and I lay in bed for a few minutes thinking about about how long I'd been a Bowie fan. As a bit of an outcast (under statement) in a small midwest town, I loved David Bowie. He was this beautiful, slinky, intergalactic pirate, whose songs were about such otherworldly, wonderful subjects.

It was such a gift to watch the 1980 Floor Show on The Midnight Special. I could not believe I would actually be able to see an entire show dedicated to Bowie and his band. Oh my godz! My young mind was blown. The show was perfect, smart, and oh so cool. The "I Got You Babe" duet with Marianne Faithful, who dressed like a nun and was so obviously high, was brilliant. 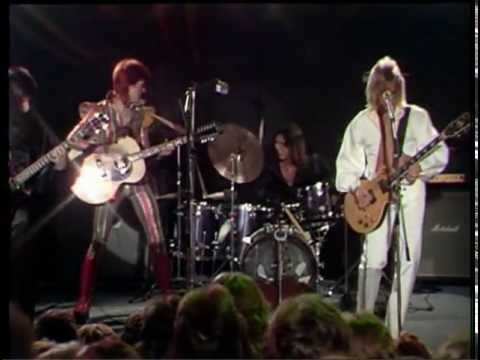 I caused quite a sensation in grade school when I wore a red dog collar to school. Diamond Dogs had just come out and was ready to show my support. People freaked out. My step mother and dad were so angry at me - it made absolutely no sense to them. They would retell the story, as if I'd woken up and decided to wear the dog's collar to school. In their defense, they were always looking for ways to solidify the fact that I had to be bonkers. They sadly missed the point.

As an adult, I see that I was paying homage to probably the single most important cultural icon and artist of our time. It makes me smile that I was lucky enough to have at least caught a glimpse of the Thin White Duke in all his glory.

The dog collar, btw, was purchased new; it was not borrowed from the dog.

Posted by mankybones at 7:04 AM No comments:

I am no doubt the next to the last person to see Amelie. There's got to be one more person…

Like a lot of folks, I am a huge fan of Jean-Pierre Juenet, but I sort of figured I wouldn't care for this film. Yep. I've watched the beginning a couple of times but never even made it half way through.
Thanks to Netflix I can watch when the mood strikes,  so I decided to give it a go earlier in the week. People love this film - WATCH IT TO SEE WHY!

Yes, the story is cute, but oh my, that color palette - red, green and the occasional pop of blue. I was pausing just to soak in the colors - godz, look at all this green - and to drool over the crazy details in each set.

Of the complementary pairs, red and green is really hard to get right. Primary green and red show up in traditional Mexican folks art and of course, Christmas. That's part of the battle - using these two colors together can get you pigeon holed. As odd as it sounds, this color palette is never "obvious" in the film. I am not sure how this is possible.

Amelie's apartment is full of gorgeous reds. Basically, everything is red, save the lamps which were apparently added post production.

I would never have thought blue would work like this, but it does, or does it? 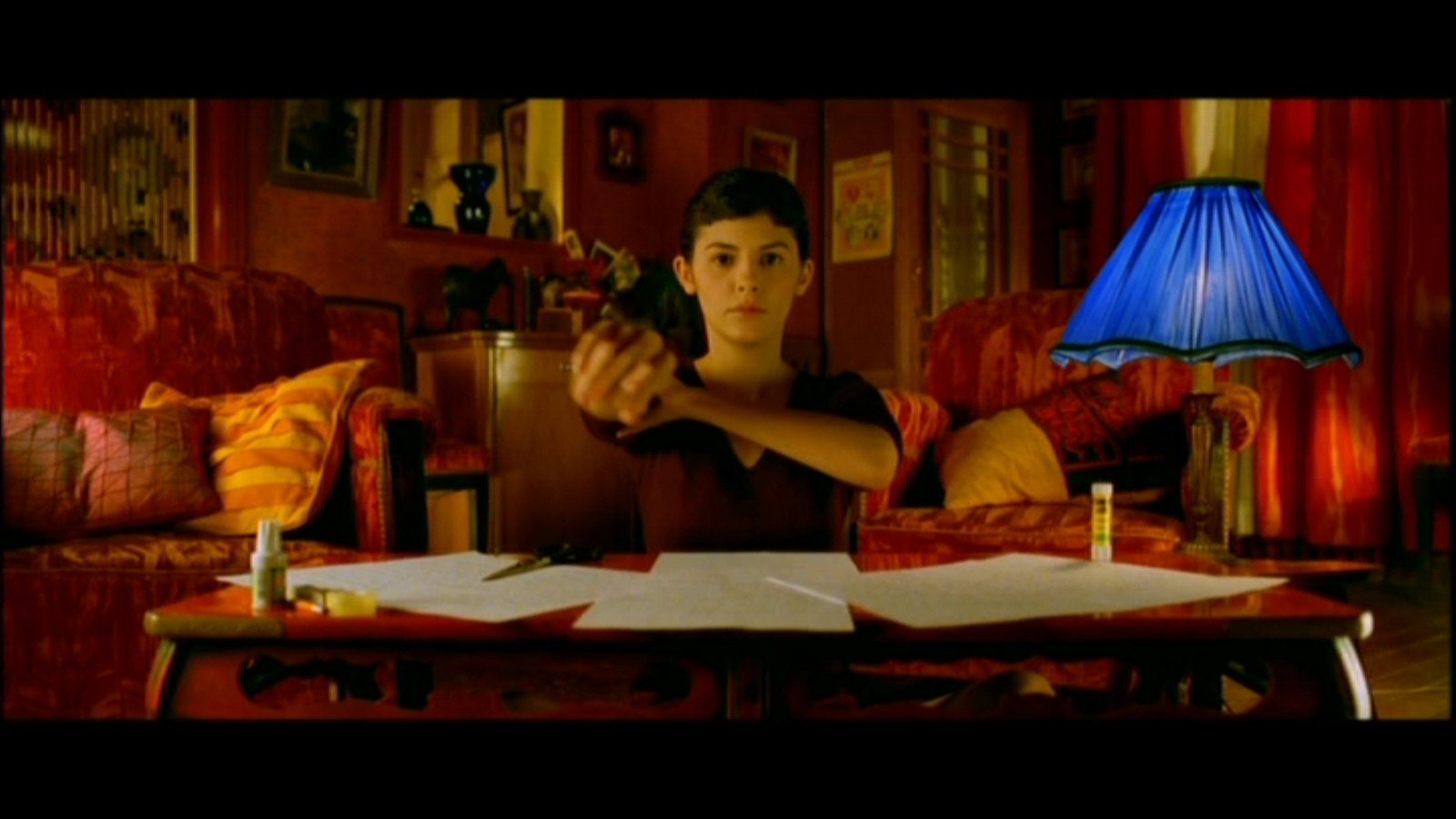 However, I can count the scenes with pops of blue on one hand.

Who doesn't want to hang out in the Two Windmills cafe?  All the tinkling thick glasses, diffused lightning, and people watching possibilities - *sigh*. Apparently Jean-Pierre bugged the owner for almost a year before being allowed to film in the actual cafe near where he lives. The place was ready to close its doors and now it's quite the tourist destination.

For me, the message was - there are interesting people all around you - just open your eyes - get to know them. Mr. Dufayel and Lucien are prime examples of folks who were pushed to side but have much to offer.

It could've been the case that Nino was some sort of perv and it was all for naught. Who hasn't thought someone would be interesting only to find out they were a dud? I've been on the dud-end of that.

“Fantasy love is much better than reality love. Never doing it is very exciting. The most exciting attractions are between two opposites that never meet.”

Is it my favorite Jean-Pierre movie? No. For now, my fav is The City of Lost Children, however, I have been chomping at the bit to watch The Young and Prodigious T. S. Spivet and it looks quite promising.

Posted by mankybones at 8:47 AM No comments: 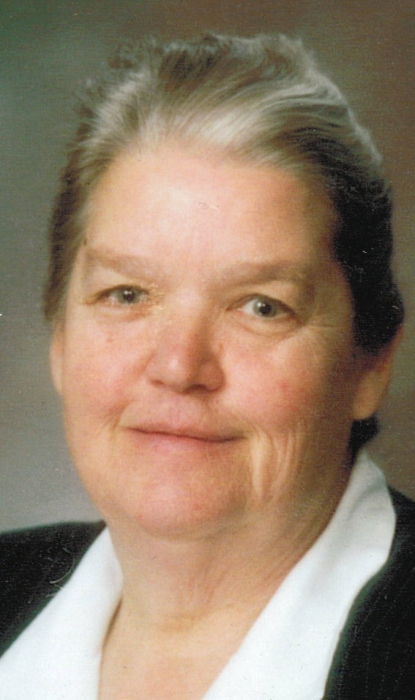 Janet Goss was a real life lunch room lady - she was my lunch room in grade school. She was always the one who spoke to us  When someone says "lunch room lady" I always picture Janet. I don't mean that in a cruel way, I mean that in a good way. I always remember her big laugh and she seemed to be joking with her co-workers too. I think Janet would've been fun to work with and I saw her several times hand out extra bread and butter sandwiches to some of the really hungry kids. As an adult, I realize that's two good trait to have; a sense of humor and a willingness to right a wrong.