Such a British Thing To Do

I heard a bit of Bob Mondell0's review of the movie The Trip on the way from work. It's not that I want to see it, I most likely won't, but it was quite delightful when Bob went into some detail about Steve Coogan and Rob Brydon imitating Sean Connery and Micheal Caine in the movie. He also makes a point that you can imagine Sean Connery and Michael Caine's voice, but you can't imagine Brad Pitt's or Angelina Joline's. Spot on, that.

One of my fav parts of Train Spotting was this constant bit of dueling Sean Connery from Sick Boy and Renton.

Sick Boy: [Sean Connery accent] Do you shee the beasht? Have you got it in your shights?
Mark "Rent-boy" Renton: [aiming the pellet gun at a dog] Clear enough, Missh Moneypenny! This should preshent no shignificant problemsh!
[shoots the dog which starts attacking its owner]
Sick Boy: For a vegetarian, Rents, you're a fuckin' EVIL shot!
Posted by mankybones at 9:45 PM No comments: 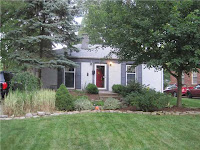 I'm going to be moving to this adorable cottage over the course of the next several weeks. Final straw with the property management folks (decided to tell me after 5 month that they no longer handle the property - but, they've been cashing the checks....) concerning the latest shower/plumbing problem. The shower in the master bedroom is DOA.

I also had an MRI at CDI Radiology for an abnormal salivary gland on the right side under my tongue.

INTERPRETATION: MR imaging demonstrates moderate prominence of the salivary glands asymmetrically larger on the right in comparison to the left. This is best seen on axial image 21 of series 5. On sagittal imaging the prominence of the salivary gland is more significantly noted on both coronal and sagittal images as well as the contrast-enhanced images. Specific evaluation of the floor of the mouth, however, demonstrates no evidence of cystic lesion or ranula. The tongue base musculature is normal. The submandibular glands are normal. The bilateral parotid glands extend anteriorly along the duct to a greater degree than is typically seen; however this is symmetric and well within normal limits. Nasopharyngeal soft tissues are normal, and the visualized portion of the intracranial contents are normal.

There are a few small scattered lymph nodes bilaterally, left slightly greater than right, within the jugular and jugulodigastric chain. However, these remain within normal limits. Oral mucosa is grossly unremarkable.

IMPRESSION: Prominent but otherwise normal-appearing sublingual glands. This is asymmetrically prominent on the right in comparison to the left but no evidence of intraglandular lesion is identified. Finding is best seen on image 21 of series 5. No evidence of ranula or other mass lesions is present.
Posted by mankybones at 5:01 AM No comments: