Sigmund finally got his teeth cleaned on Tuesday. Being the bad cat mom that I am, I've put this off forever. I thought he would be quite a drooling mess. Turns out, he was a little trooper. He did, however, end up hating me and spent all of his time on the cedar chest in the fake living room.

Friday night - Detour at IMA. The Winter Night Film Noir series @ IMA has been a blast. My only regret is that I missed Stray Dogs. For whatever reason, the theater was frakin' bakin' hot. BTW - I really dig the photo of Ann Savage - that is smokin' hot.

Saturday night - 2 From "Santo" @ Gary's house. Santo and the Blue Demon vs. Dr Frankenstein and Vengeance of the Mummy. This was so much fun! When you have 4 or 5 people riffing at the same time, you know you have a gem on your hands. Santo gets many asshole pints for strangling the panther. Boo!

Sunday - Movie of the month @Gary's - Yats later. Footlight Parade from 1933 was this month's selection. James Cagney not only danced, but sang as well. I actually liked watching him dance - couldn't take my eyes off of him.
Posted by mankybones at 4:05 AM No comments: 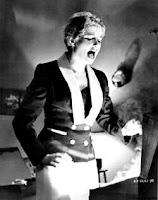 The International Meetup Group met at Luxor restaurant Thursday night. Very friendly service, but pretty bland fare. We were the only patrons to show up the entire time we were there. Had a really yummy beer - Keo.

Friday night - Film Noir at IMA - Kiss Me Deadly. This movie had everything I like - hot and cold dames - wacky plot twists - the end of the world as we know it. Everything was so unexpected. I was completely entranced the entire time. The Starbucks conversation was interesting as well. We talked about TV shows - how bad is that?

At some point I saw An Education. This film really captured the look and feel of the era. A lot of attention to detail. I can easily see where a young, attractive girl would be caught up in the whole thing. Weekend in Paris, fancy dining,.. In my next life, can I please be a pretty girl?

Sunday - My birthday. Started a new painting. Earlier I bought myself some silver jewelry in Broad Ripple. Lovely hand made stuff.
Posted by mankybones at 4:07 AM No comments: 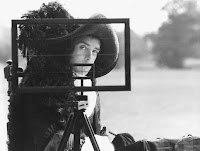 I worked from home Tuesday and Wednesday because of the ice. Crazy! I saw The Draughtman's Contract courtesy of NetFlix. I posted a comment about this movie on the Commentary Track website under Free-Talking on Cinema, Movies, and Film February 2011. the question was - What movies would you reach for to sit out a blizzard?

"This is one of a couple of pre-2003 Peter Greenaway films I have not seen. The plot – In 1694, a young artist, Mr. Neville, is contracted by Mrs. Virginia Herbert to produce a series of 12 drawings of her estate as a gift for her estranged husband. We see Mr. Neville as sketches his way, using a viewfinder with a grid, around the estate in 2 hour increments dealing with quests who refuse to move out of the way and sheep who choose to rest, in frame, after grazing. As with Peter Greenaway’s other films, this one also looks as if he time-snatched a group of Renaissance artists and outfitted them with equipment to make a film. Every scene is a lush composition of landscape, eloquently executed (barbs included) dialogue, and foppish attire. I’ve only just started watching this morning, but it’s a good contrast to the elements outside."
Posted by mankybones at 5:03 AM No comments:

Posted by mankybones at 7:43 AM No comments:

Tuesday - Meet the Film Buffs @ Cornerstone Cafe.
Thursday - Black Swan @ Landmark Theater. Yawn. Really didn't care for it. Not a very original plot, nothing to look at, blah, blah. Oscar performance? Uh, really?
Sometime during the week - I watched Female Convict #701 - Scorpion. Oh dear godz! I love this stuff.
Sometime during the week I watched The Phantom of Soho. Wow! German actors with dubbed English accents. Wacky camera work, over the top characters, and a surprise ending.
Friday - Wild Parrots of Telegraph Hill. Jeannie had a vegan group meetup. Yummy stuff. I've seen the movie before, but it's such a good story. Got home late again.
Saturday - The Apartment. Loved the crazy office scenes. Got home late - just about ran out of gas.
Posted by mankybones at 5:06 AM No comments: