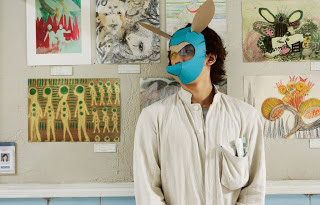 Friday night @ home I watched I'm a Cyborg, But That's Ok by Park Chen-wook. Young-goon (yes, that's her name in the movie) works in a radio factory and one day decides to connect herself to a wall outlet. She is promptly sent to a mental institution that seems to be filled with folks who are eccentric and quirky rather than actually possessing psychological disorders. It's quite cute! Il-soon (Rain) sings a goofy song to Young-goon that includes a yodeling chorus. Never fear, there are come really violent scenes to break the cute-ness.  I just love the art work (again, presumably done by the clients) behind Il-soon above. 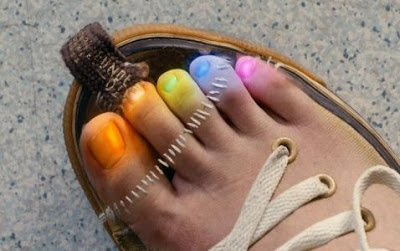 The toes on Young-goon's right foot light up when she's fully charged. 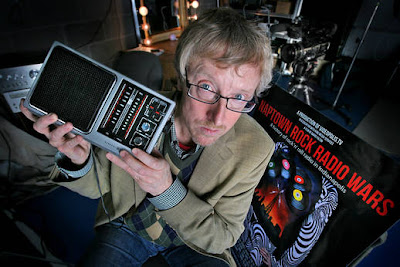 The Irvington Theater had a free showing of the documentary  Naptown Rock Radio Wars Saturday afternoon. Once upon a time, people got their music from one of three places; a concert, an album, or a radio station. NRRW follows Indy's two big players battling for the air waves - WIFE-AM 1310 and WNAP-FM through the 60's and 70's. WNAP was the nation's first successful all FM  radio station. You don't have to live in Indy to enjoy this documentary. Very well done and very interesting subject matter for those of us who remember when DJ's ruled the world. Wacky contests and promo concerts were the norm. Some of the DJ's in the film were available for a book signing (yes, I  bought the book) at Irvington Vintage after the movie.

Oddly enough - I Am the Muffin Man was the first song WNAP played when it came on the air. Hmmm...I hear instruments in this video that no one seems to be playing.

Posted by mankybones at 6:08 PM No comments: 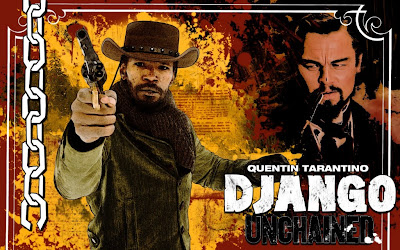 I caught Django Unchained at the Glendale 12 on Sunday. No Super Bowl (yawn) for me. Kudos for using the opening score from the original Django; that's one killer song!

Back to Django Unchained....

Tarantino cleverly manages to create a new genre - Spaghetti Western meets Mandingo meets Blazing Saddles meets Blacksplotation. Is this a Oscar worthy movie? No, probably not. Is it a must see movie that will have you forming opinions (no fence riding here) and creating interesting dialogue with your friends? Yes!

I laughed out loud, I gasped out loud, I cringed and shook my head many times. This is technically a long movie, but it really didn't feel 1 minute too long. I was delighted to see two actors I really admire who appear in two of my favorite television series.   Eto Essandoh, who played the physician/pathologist on Copper, plays a slave who can't take the Mandigo fighting any longer. Walter Groggins, who played Boyd Crowder (oh so bad) on Justified, plays Billy Crash - a guy who can handle the torture handy work for Calvin Candie. Although Billy Crash only appears in a small part of the movie, Walter Groggins steals the scene from everyone else. He even comes up with the really evil swagger that just defies description. Can you slink along just a little bit more?

Similiar to the scene in LOTR that plays homage to Sean Bean's character Lt Col Richard Sharpe, where Boromir is holding a shard of the sword of Nassil and says, "Still sharp.", DU has it's own out-of-band-actor-homage with the original Django - Franco Nero. Django is sitting at the bar at the Cleopatra Club, and Franco Nero sits at the other end. There is a quite humorous dialogue about the pronunciation and spelling of Django between the two "Djangos".

I've never cared for Leonardo DiCaprio. Never. Until now. I cannot imagine anyone else who could've played such a spoiled, racist phrenology elitist. His insistence on following politesse protocols to the tee that soon erupt into a gun slinging fray is beauty. So polite.

Posted by mankybones at 6:50 AM No comments:

Nothing Is Easy and Killer's Kiss 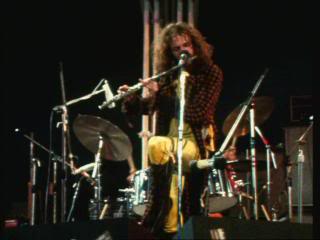 Friday night I saw Jethro Tull: Live at the Isle of Wight 1970 - Nothing Is Easy. It's a mini-documentary with Ian Anderson commenting on Jethro Tull's performance on the 5th day of the Isle of Wight Festival 1970. Ian explains how the standing-on-one-leg-while-playing-the-flute came about.

Now...the really interesting thing for me is what I learn after watching a movie. In this case, I had no idea until after watching this, that the Isle of Wight Festival in 1970 was the largest musical event of this its time. I'd heard of the festival before, but I'd always thought..."Oh, that's nice. They probably had 10,000 people watching." Uh...no. I love it when I'm really wrong. 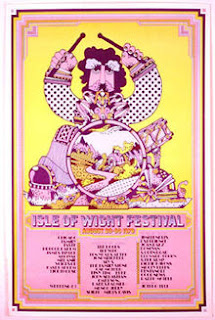 It was a 5 day (yes, 5) music festival with 600,000 in attendance! Much larger than Woodstock. I stand corrected. Bob Dylan was there! It was Emerson, Lake, and Palmer's second gig. Interestingly enough, Woodstock (at White Lake) and Isle of Wight (pronounced - White) have similar sounding names for locations. 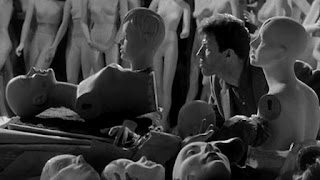 I watched Stanly Kubrick's second film Killer's Kiss on Saturday night. This black-and-white film noir pulled no punches; I'm a sucka for bw film noir. Filmed mostly at night in some really seedy Manhattan locations, KK tells the tale of down-on-his-luck boxer who meets a pay-for-a-dance girl and decide to move to Seattle. The guy who owns the club where the girls dances has other ideas. Scrumptious camera work combined with peeking-at-ny-in-those-days locations makes this one of the most eye-candy films I've seen so far this year. There is a fight scene in a mannequin shop that would've worked in a 60's noir art film. Who doesn't like a good mannequin shop shot? Parts of this film were very contemporary.
Posted by mankybones at 10:55 AM No comments: